What’s really going on behind the scenes?

In the last few years, we have witnessed a massive escalation in the culture wars, along with all sorts of strange backroom shenanigans and political plots. What is the secret, hidden meaning of these tumultuous times?

The answer, my dear Droogs, is “Elite Replacement Theory“!

As far as I can tell, I am the first to notice and name this theory, so I will claim it until proof to the contrary arises, and even then, I’ll still say it’s mine, as what’s wrong with a little bit of self mythologisation?

The basic idea of ERT is as follows:

Up until around 1945 European elites ruled the world. But since the general disasters of the Great European Civil War (1914-45), several other elite groups have come to the fore; some justified on their merits, some perhaps not so much; while others have been totally toxic and inimical to all European interests and Europeans as a group. You could say that some elements of these new elite groups are even hostile to Civilisation itself.

Civilisation—see Kenneth Clarke’s wonderful and glorious 1970’s BBC TV series for further details—is, in its deepest essence, a mainly European thing, dependent on our particular European skill set. So, any threat to that is a severe thing. Indeed, when Europeans are under attack, so too is Civilisation itself.

You may remember the recent shock many of us felt when Notre Dame Cathedral was in flames. Who could fail to shed a tear as this awful—and quite possibly deliberate—tragedy played out across the media?

But this symbolic act didn’t happen in a vacuum. What we are witnessing now are the results of a century of profound change. By the early 20th century, it is clear that many of the old European elites had become tired and moribund. Soon dynasties fell, and family lines degenerated.

Despite this, some of that old elite still show flashes of inner strength and returning power. Here I would even controversially cite the British Monarchy, whom, I believe, clandestinely support Brexit and the attempt it represents to break the power of some of those more recent elites, embodied in the EU.

It is my argument that an “Elite Replacement Event” may well be underway, made manifest in that seminal year 2016 with the phenomena of Trump and Brexit. Yes, these events are often characterised as populist uprisings, but that is an oversimplification, as any uprising always needs cooperation from above. There is a genuine possibility that an exciting new nationalist elite is rising to gain dominance and control over our nations and, most importantly, over elite circles of power and hegemony—in short to re-grasp the very reigns of Grand History itself to take a whip-hand in its own destiny!

Although I have coined the term, “Elite Replacement Theory,” I don’t claim to have invented the bigger theory of which it is merely a proposed component, namely Elite Theory. I am merely its humble student, relying instead upon the insights of Pareto, Mosca, Gentile, and Michels of the Italian School for most of my insights.

Here is a reasonably accurate and concise Wikipedia entry on Elite Theory, which can serve as a convenient introduction:

The theory posits that a small minority, consisting of members of the economic elite and policy-planning networks, holds the most power—and that this power is independent of democratic elections. Through positions in corporations or on corporate boards, and influence over policy-planning networks through financial support of foundations or positions with think tanks or policy-discussion groups, members of the “elite” exert significant power over corporate and government decisions. The basic characteristics of this theory are that power is concentrated, the elites are unified, the non-elites are diverse and powerless, [and that] elites’ interests are unified due to common backgrounds and positions and the defining characteristic of power is institutional position.

It is clear from all the available historical data that the old elites used to be much more Eurocentric, favouring Western Culture and Western Civilisation, and were much more concerned about the health and interests of ordinary European people. Of late, however, it is clear that they have stopped behaving in that way, which is why we need to amend the analytical tool of Elite Theory in a more proactive direction, towards Elite Replacement Theory. ERT is weaponised Elite Theory!

This new theory is reactionary, but it is a reaction to the threat identified by the New Right as “The Great Replacement,” which needs no introduction here. Suffice to say that the present constellation of elites—at least pre-2016—is pushing towards the establishment of a global, possibly Chinese-led, one-world government, where the civilisation and interests of European peoples will be regarded as an irrelevance. Naturally, there will be some resistance to this nightmare vision, and even considerable segments of the elite must be having second thoughts about it, which is probably why 2016 happened.

ERT is moral and just, as it seeks to do to globalist elites exactly what they are doing to us—basically to replace them or large sections of them—and by so doing to save our own nations and homelands, as well as restoring our rightful hegemony in the world.

But ERT is not just reactionary; it is also revolutionary and creative. More than simply a desire to reverse the last 100 years of globalist mischief and mayhem, it is an attempt to create a new reality and to go on the offensive, recognising the schisms in the elites and exploiting these through forming wedges and alliances. This marks it as a “New Right” philosophy rather than a sterile creature of the old dead Right.

“The Elite” should never be understood as a monolith. Its unity is functional more than essential, and underneath its most adamant surfaces, fun rivalries, deep cracks, and potential fissures. The toxic and malevolent part that has risen to the fore since WWII is truly parasitic and vampiric—as more layers are peeled off, its corruption and evil is revealed. This aspect has been portrayed and even parodied in mainstream media many times—by Ian Fleming in his Bond series with SPECTRE, or at the other end of the literary spectrum through William Burroughs and his concept of Interzone Inc. and Dr Benway to name just two examples.

The evil elites that have dominated since WWII prefer to operate from the shadows. Still, in recent years, as I’m sure you have noticed, they have become bolder and more shameless, to the point where they are now openly showing their hand in one attempted coup after another against President Trump—the Russiagate nonsense, the Mueller fiasco, and now this absurd Ukraine impeachment attempt.

The cabal is also breaking all precedent to derail Brexit, including defying the Queen of England and Boris Johnson with a bunch of sinister-looking judges and a poison dwarf of a Speaker, all of whom may well be hostages to their own dark pasts.

In short, this is an age that cries out for an “Elite Replacement Event” and the theory to back it up.

The opposition to these evil globalist elites has grown stronger and stronger, and, ironically, it has also become “global.” Just as the globalists are global, so too the new Nationalist populist uprising must be global.

Beyond the roiling Anglosphere, this global aspect is evident in the likes of Putin, Orban in Hungary, Salvini in Italy (who shall soon return to power!), brave Marine LePen in France, and Wilders in The Netherlands, as well as Duterte in The Philippines, staunchly right-wing Japan, Modi in India, and the new leaders in Brazil and elsewhere.

As the battle intensifies, different narratives will be weaponised. We will hear different things from different people, for example, Jordan Peterson, a possible plant, has pointed out that the post-war world of the globalist elites has overseen a rise in prosperity and a period of great growth in the West—as if that was all-important!

As I sit here, writing this in Chiang Mai Thailand, I am happy to admit that international free trade and the explosion in communications has had some benefits, but why be made to throw the baby out with the bathwater, as they say? Even as it challenges the power of the globalist elites and overthrows them, the new populist right-wing nationalism can keep these gains in the name of both continuity and stability.

As a Historicist, I believe that History is the great engine that drives humanity forward.

Globalism, Liberalism, and—to a lesser extent—Neo-Liberalism have all had a part to play in the greater picture of post-WWII historical reality. At times, this has even been appropriate and, dare I say it, necessary.

Personally, I have felt the pull of the Libertarian Right, as well as New Right and right-wing Socialist ideas. I will admit I was no small fan of Ronald Reagan and Margaret Thatcher in the 1980s, two prime examples of Neocon Globalism. I believe like many Libertarians that there were interesting truths and benefits to what Reagan and Thatcher were doing and brought to the table. But I always thought their function was primarily Historical: bringing down the USSR through radical capitalism and opening up the historical horizons that now lie before us.

The ideologies that served as their vehicles have, in the hands of evil elites, been steered increasingly in wrong and inauthentic directions, manifesting as utter corruption. They are now out of sync with the techno-scientific historical World Picture and with the Zeitgeist of all European people and nations.

Only this explains what is happening now.

Truly something else is coming. All the smart political philosophers of recent times, both on the Left and the Right, have seen it and detected it. Go to the contemporary politics section of any decently stocked bookstore, and you will find hysterical books from Neo-Liberals and Neocons lamenting that the New Right is taking over, and is literally Hitler or Putin.

But there you will also find a bunch of more nuanced works that examine the New Populism with a fairer eye. Viewed in total, this all speaks to Elite Replacement Theory and is a manifestation of the thesis I am presenting here: The evil elites are screaming in pain, “Don’t replace us,” while the authentic political movements of both the Right and the Left are answering back “No, we will replace you, you evil bastards.”

The Original Article was Published on The Affirmative Right 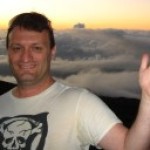 Richard Wolstencroft is an Australian Indy Filmmaker (director, producer, writer) and film festival director of MUFF (The Melbourne Underground Film Festival), events promoter, writer, philosopher, book collector and political agent provocateur. He has made eight features, has run his film festival The Melbourne Underground Film Festival (MUFF) for over 20 years, founded and ran the notorious Australian nightclub The Hellfire Club in the 90’s and written many articles and done many interviews on politics, theory and aesthetics and made over 100 Reports from Tiger Mountain, his political video cast.