What is apotheosis? Some may call it a megalomaniacal delusion which a tyrannical dictator has when he names himself a god such as Artaxerxes. Some might say that it is the moment of salvation after death or during the end times. Some might say that evolution tends towards apotheosis. Some might call it heretical, fraudulent or supremacist. That it is a racist polemic talked of by the “far-right” used to justify their goals and aims. But what is never spoken of is the necessity of apotheosis, ontologically speaking, being and existence tend towards complexity. This need for ever more complexity, analytical and intellectual power, physical might, and beauty is an ontological phenomenon often not explored for fear of the aforementioned reasons. It makes one think of the eugenics programs implemented in Germany in the 20th century and for this reason, it has become taboo. It is to be posited that apotheosis is exclusionary but this is because for ascension to take place in ethnic and racial terms one must be exclusionary as when the blood is mixed and a hybrid is made it has a regressive and degenerative effect, therefore halting the rise to a higher nature or consciousness. When we talk of high culture, high art, high church or any other such organ of humanity’s creative instinct we must keep in mind that this has been a progressive effort of racial and ethnic distillation over thousands of years. For this reason, any admixture of two peoples who are of separate developments in life, existence, technic and psycho-spiritual ontogeny destroys the organicity of the two peoples and produces a synthetic, plastic people; ripe for exploitation. A deracinated people become easy pickings for a special kind of miasmatic Levantine tribe.

If we are to look at the real progress of man instead of the delusive “progress” of the modern age which is really just a form of acceleration towards ruin, a downward trending “progress”. In this modern sense, “progress” is simply decadence dressed up as a virtue. The ending of this progress being Babylonian in scale, leading to a termination of highness, and a return to a savage state of being. This is completely antithetical to the idea of apotheosis and hinders any actualisation of this lofty ideal. What it really boils down to is creation and destruction, germination and blight, pullulation and annihilation.

Apotheosis can be likened to the Nietzschean Übermensch, a goal for man to achieve; but apotheosis as a concept stretches further than just that, it is an infinite goal with no defined goal-post so to speak, just an upward surge towards greatness, grandeur and brilliance, forming an unprecedented biological majesty, imperial in scope. A grave risk is present in this though and many would only look to the material world to define apotheosis. They may look to the Roman or the Greek, the British or the French, for their martial achievements, their production of art worthy of preserving, but apotheosis is not within the inanimate but in the animated, the man, and the value of him becoming something rather than just being something. There are some things which must be in the world but there are also things which must become and to call any prior civilisation “the pinnacle of humanity” is ludicrous. A fraction of our potential has been achieved compared to what we could achieve as a species, race or ethnicity, hence why it must be the principal focus of nations to put first the becoming of their people. Not merely the safety and economic prosperity of its people.

Humanity is the great becoming, it is sub-human to be satisfied with just being. The crab will move sideways until the end of time but man must always move onwards and upwards, this is the iron, immutable law of mankind. Like the Shark, if mankind was to stop moving then it would succumb to death and rot away. So then, it is a question of survival when we talk of this upward surge, there is only one choice to make: atrophy or hypertrophy, ascension or declension, a rise or a fall. Just like a muscle, for the growth of man, he must stretch and flex his ability and tear the fibres of his being else calcification will set in and his mould will harden into the mediocre milieu which the modern world seeks us to meld into. This is not in the nature of the European, we must shed our exoskeleton like the mollusc, hatch from our chrysalis and evolve into what we were meant to be. If Man is the ruler of his destiny then he should take hold of it and use it towards his higher urges rather than squander it on petty mercantile aspirations and sexual deviance.

It is my great wish that we collectively awaken as Europeans and take the spot of overman which was given to us through thousands of years of selective breeding and genetic enhancement. As Europeans, we form the vanguard of humanity, we are the pioneers of mankind, the maker of nations, the heroes of old, the spirit of our people is legendary and our task is daunting and intimidating, but it is our responsibility and duty to take up the mantle once more and charge into the unknown and take our place as this universe’s master. Not to slight the creator of all things but to follow his edict given to man as told by nature to live, survive and produce new broods of superior beings. This is our mission, this is our goal, this was the initial intention and it is time to fulfil it. 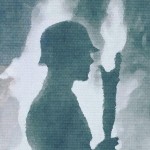