“True chastity is not a perversion – for it involves, not the deflection of desire from its personal object, but either the overcoming of desire or the control of its overt expression. The unchaste soul may be unable to perform the sexual act. He may […] still live in the world of desire, motivated by it in everything, not fulfilled but frustrated in his loneliness. True chastity involves a devotion to projects which do not require desire – a setting of desire to one side, not by denying its interpersonal nature, but by forbidding its motivating power. This need not destroy desire: indeed, popular wisdom and popular morality invite us to see it as an important prelude to desire, and the normal condition of the person who has no genuine attachment to another. Desire may, in the end, be overcome, or ‘sublimated’ (a description which, however, suggests explanations that are at best contentious); but it is not perverted by a process which aims precisely to safeguard its interpersonal intention-ality and to free it from obscenity. This is, I believe, the correct way to understand chastity — or, if you prefer, ‘true’ chastity […].

Chastity is a project designed to restrain the sexual impulse and to safeguard it against obscene abuses, so that the full intentionality of desire may grow from it and, in due course, be released towards its goal and fulfillment. Chastity may also,
in certain cases, be an end in itself. But then it is never obviously admirable unless the outcome of a vow: that is, it is an act of renunciation which is the inverse and the image of the vow of love, and which has its own troubles and ecstasies. Then, indeed,
chastity is the clear mirror of erotic life, and like the chastity of St Teresa, so acutely portrayed in Bernini’s sculpture, it shows itself in an ecstasy which is the intensest form of embodiment.” 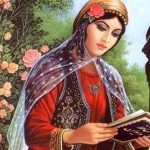 Canadian born and raised woman of Persian descent. Traditionalist-perennialist Shi’i Muslim with a strong opposition to globalism, (post)modernity, and feminist sex-positivism. An advocate of cultural preservation for all peoples.